Skip to content
REQUEST A CONSULTATION
Is Spravato™, TMS, or Ketamine Right for Me?

A recent study has found that repetitive Transcranial Magnetic Stimulation (rTMS) is effective in treating depression. The results showed that the majority of patients experienced a significant reduction in symptoms, with some even achieving complete remission. Read More. 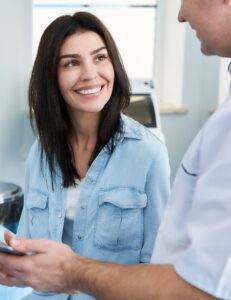 What is ketamine treatment?

Ketamine is a fast-acting anesthetic that is safe for treating chronic pain and mental health conditions. Patients suffering from depression, anxiety, alcoholism, PTSD, migraines, OCD, fibromyalgia, bipolar disorder, and other pain syndromes can find relief with ketamine infusions. From Hudson, Route 303 or Route 8 to I-77’s Route 18 or Cleveland Massillon exits is an easy drive to our ketamine clinic.

During the Vietnam War, ketamine was used as an anesthesia medicine. It was safe enough to be administered on the front lines – even by non-medically trained soldiers.

Its antidepressant properties were discovered in 1970 and since then, its efficacy for treating chronic pain and mood disorders has been documented in numerous positive studies. We offer it as an infusion, injection or the nasal spray SPRAVATO.

How does ketamine infusion therapy work?

During an IV treatment, ketamine selectively blocks the (NMDA) receptor which allows the central nervous system to fill up with glutamate.

Multiple ketamine infusions are needed to allow enough glutamate in to kick-start the AMPA receptor which will then produce Brain-Derived Neurotrophic Factor (BDNF). BDNF increases neuroplasticity and stimulates synaptogenesis.

In non-medical jargon, ketamine infusion therapy helps the brain build new neurons, decreases inflammation, and allows the neurons to communicate more effectively. Find out if ketamine therapy is right for you. Complete the form on this page to set up a consultation.

“Until I received Spravato and Ketamine at Ascend, I had tried every medicine out there without much relief. Now my depression has lifted and I feel like a new person.”

Since ketamine is faster-acting than antidepressants, it can create immediate relief from major depression and suicidal ideations. IV ketamine infusion can quickly reduce life-threatening thoughts. During and after treatment, patients have described the effects as feelings of peace, compassion, and love.

Approximately 70% of patients experience a significant reduction in their symptoms. Many people experience these results during their very first infusion, which makes it a faster-acting treatment than common depression and anxiety medication and talk therapy.

What to expect at a ketamine clinic

At Ascend Health Center, you’ll enter a comfortable, spa-like environment with accommodations that will make you feel at ease. We already work with Hudson Family Practice, Valerie Padd’s Intimacy Health, and other local offices. You don’t have to leave your current provider to receive care from us. At our Hudson ketamine clinic, a nurse anesthetist will administer small doses of ketamine through an IV. You’ll be seated in a comfortable reclining chair for the IV treatment. Some patients bring a family member or friend to keep them company during the infusions which range from one to several hours.

During the IV ketamine infusion, many people describe their experience as peaceful and relaxing. They describe a rapid relief from depressive symptoms and thoughts. The effects can last a few weeks or months but are most pronounced immediately after an infusion. Patients typically receive six to ten infusions over the course of several weeks. Ascend is open until 7PM some days to make sure they can accommodate busy schedules. Many patients experience immediate relief during their first infusion.

Take the first step to feeling better today. Fill out the form to request an appointment at our Akron, Ohio ketamine clinic.