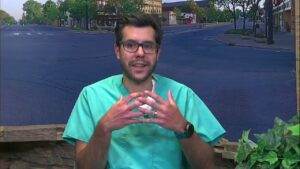 Do I need Jesus or Xanax? Nurse anesthetist Nick Angelis discusses difficult topics as a Christian and a clinician with Hank the Sonic Shaman. The medical system can’t answer spiritual questions. Unmet expectations can harm our mental health, substituting truth and sincerity for shallow self-righteousness. The first step is to know ourselves. Are Psychedelic and indigenous medicines reconcilable with faith and science? What about ketamine? With so much potential to heal, can it make people worse the way marijuana hasn’t lived up to the medical hype?

absolutely and we have  a different show it i think it’s called toasters  in the bathtub that is a disclaimer basically  saying don’t listen to either of us for your  medical advice actually schedule an appointment  you can go to ascendhealthcenter.com and that  has all the information for my practice and  what’s your website again

my website is my  name hank sotola.com that does make it easier  so as you well you know over the years i keep  learning new things and every time i learn  something new i built a whole new website  rebranded myself and then i realized like you  know the one thing that never changes is me

yeah and that does go back to expectations that  you know was i taught to be a a good boy just so  i can make life more tolerable for those around me  or at the same time am i instead saying to people  that well you know you’ve got to accept me at my  worst to see me at my best which really means  i’m not going to be considerate in many cases  well this has been a great talk so for me  ascendhealthcenter.com you can also call  us 330-754 4844 we do a lot with anxiety depression  chronic pain issues we don’t use any opioids or  and we do use psychiatric meds when necessary but  we do have a lot of options for you and then if  people want to contact you

yep it’s my name it’s  hank settler.com and then on there i have links to  all my youtubes and things where i have all kinds  of content and of course i see people locally out  of the cleveland area as well as online and you’ve  got your tick tock too and i got my tick tock oh  i’ve been doing tick tick-tock’s like crazy i’m  the sonic shaman on tick-tock and that is also  my youtube channel but i’ve been having a ton  of fun that’s probably the most fun i’ve had  just making these little one-minute videos